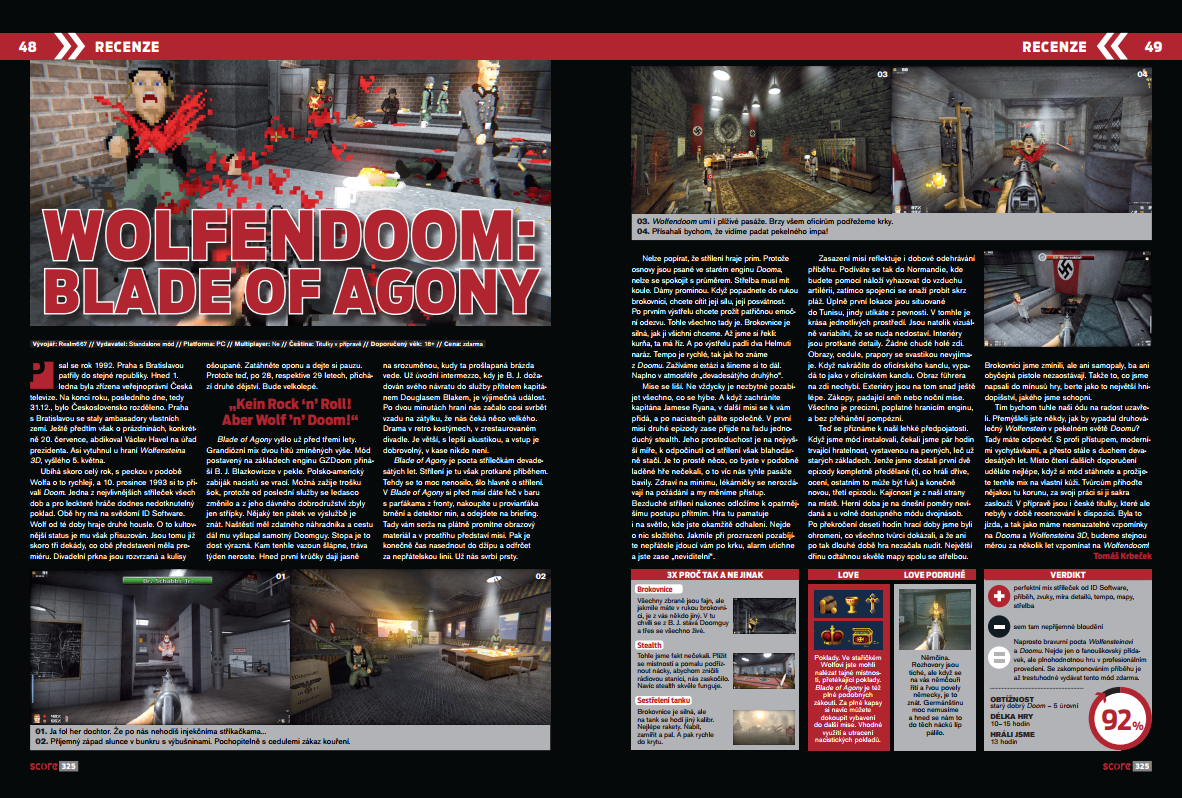 A few days ago, the czech gaming magazine Score published a full preview article of Blade of Agony's Chapter 3 release after we've given access to a release candidate version to them. What can I say - it was worth it and the whole team is totally excited by the article, the kind words and the overall score of 92%. It is a great honor to see interest in our project and that even professional gaming journalism takes care of this.

If you aren't speaking czech yourself, don't worry - click on details for a full translation of the article done by MuadDib90, no spoilers included.

It was a year 1992. Prague together with Bratislava belonged to the same republic. Right in January, the 1st public Czech TV station was established. In the last day of the same year (31.12.) the Czechoslovakia was divided. Prague and Bratislava became ambassadors of their own country. But before that, on holidays in the middle of the year, 30th of July, Václav Havel abdicated the post of a president (translation note: former president of Czech and Slovak Federative Republic and later, from 1993-2003, the first president of Czech republic). He was maybe exhausted by playing Wolf3D, which came out in 5th of May.

The year passes by, with the rock star as the Wolf all the faster, and 10th of December 1993 "the DOOM" comes out. One of the most influential FPS of all time, and for many gamers untouchable treasure. Both games are from ID software. Wolf plays the second violin from now on. All the more iconic status is attributed to him. It is nearly three decades now, when both plays were introduced. Theatrical stage creaks and scenes are scuffed. Pull the curtain and take a break. Because now, after 28, respectively 29 years, the Second Act is coming. And it will be spectacular.

The Blade of Agony was released already three years ago. The grand mix of two games mentioned above. The mod on GZDoom port brings B.J.Blazskowicz in hell. The Polish-American killer of the Nazis is back. He may be quite shocked, many things has changed since his last duty; not much is left from his bygone adventures. The time spent in retirement has signed on him. Fortunatelly, he had more than able substitute, and the road was paved by the Doomguy himself. The foot-mark is quite significant. Where this colossus steps, grass do not grow for a week. Even the first few steps will have you know, where exactly this paved road leads. Opening intermezzo, where B.J. is asked for coming back to duty by his friend, cpt. Douglas Blake, is already an exceptional event. After two minutes of playing, we got a feel at the back of our heads, that someting big is awaiting us. The Act in retro costumes, in renovated theatre. It's bigger, with better acoustics and the entry is voluntary; no one is at the box office.

BoA is a homage to all FPSs of 90's. The shooting however comes side by side with a story. Back then the stories were not so important, shooting was the main focus. In BoA you can have a talk with friends from the front in the mess hall before mission, buy an armor and mine detector in the armory, then go to briefing room. Here you can enjoy the dias and you will be familiar with the mission. The last thing which remains is to hop on the jeep and go behind enemy lines. Our fingers itch already.

Pic.01 - "Ja fol her dochtor." I bet you won't throw a syringe at us...
Pic.02 - A calm and nice sunset in a bunker with explosives. With no smoking signs of course.
Pic.03 - Wolfendoom knows even a stealth mod. Soon, we will cut throats to all those brass.
Pic.04 - We would swear, we're seeing the Hell Imp to fall down!

It can't be denied that shooting is the prim here. Because the curriculum is written in old Doom engine, noone can be satisfied with only the average. Shooting has to have the balls. Ladies will forgive. When you grab the shotgun, you want to feel its power, its sanctity. You want to feel appropriate emotional response after the first shot. This all is here. The shotgun is powerful, as we all want it to be; and then we said: hell, that's sharp. And two Jerries went down after the first "bam". Tempo is so fast, as we all know it from Doom. We are experiencing an ecstasy and continue on. Fully in the atmosphere of 92'.

Each mission is different. Not every time it is necessary to kill all that moves. And when you rescue cpt. James Ryan, he will join you in the next mission and you both will be killing Nazis side by side. Whereas in the first mission of second episode the stealth mechanics comes in. Its simplicity is high, but as a rest from shooting it's good enough. It's something you just wouldn't expect from this kind of a game; the more we liked those parts. Health on minimum, health packs are not on demand and we are changing the approach. Mindless shooting is putted aside to more careful progression through the shadows. The game responses to the light, where you are detected. Nothing complicated. After you kill all the enemies coming at you, when discovered, the alarm goes off and you are again "invisible".

Missions reflect even the time period they are in. Thus you will visit beaches of Normandy, where you will be blowing up the artilleries, while Allies will try to get through the beach. First locations are situated in Tunis, another time you're running through the bunker. This is the beauty of each environment. They are so visualy variable the boredom never comes by. Interiors are interwoven with details. No plain poor walls. Pictures, signs, not excluding banners with swastika. When you walk in to the officer's office, it looks like in the officer's office. The picture with Führer is not missing. The exteriors are maybe even better. Trenches, falling snow or night mission. Everything is precise, at the limit of the engine; all that is grandiloquent, without exaggeration at all.

Now, we will admit our small bias. When we were installing the mod, we expected a few hours of gameplay, built on although solid, but rather old foundations. But we got first two episodes completely redesigned (those who played before will appreciate it, others don't have to care), and finally the new third episode. Contrition from our side is right here. The gameplay time is at today's standards unseen, and be it a free mod, this counts two times. We were amazed after beating ten hours of gameplay, what all the developers managed to do, and even the fact the game wasn't boring at all after all that time. Majority is driven by delightful maps with all that shooting. The shotgun was mentioned, but not any other weapon, not even pistols, are behind. So, that what we wrote to minuses of the game consider as a maximal nitpicking we are capable of.

With this we can close our Ode to Joy. Did you ever think, how the Wolf from WWII in the hellish world of Doom would look like? This is your answer. With professional approach, modern gadgets, and still with the spirit of 90'. Instead of reading other recommendations, you'll do the best when you download this and experience this mix for yourself. Send developers some money, they damn deserve it. Also czech subtitles are in preparation, which weren't available at the time of review. It was a hell of a ride. And as we have indelible memories of Doom and Wolf3D, we will be remembering Wolfendoom in a few years with the same feeling!

3x WHY AND NOT OTERWISE